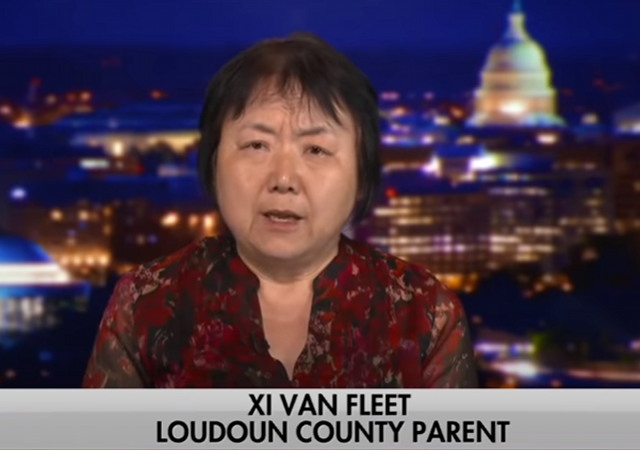 Loudon County in Virginia has become a hot spot in the ongoing battle over Critical Race Theory in public schools. One mother who attended a recent school board meeting to speak out against CRT is a woman named Xi Van Fleet.

Van Fleet was a girl in China during Mao’s Cultural Revolution, and she is warning that she sees history repeating itself.

In the clip below, Van Fleet suggests that Critical Race Theory is Cultural Marxism, and that it is following the same pattern as the Cultural Revolution and even uses some of the same language.

She notes that the only major difference is that in China, it was all based on class, whereas here it is being based on race. Watch:

Thursday night, Van Fleet appeared on the Sean Hannity show to elaborate on her point.

A Virginia parent, whose remarks at a Loudoun County school board meeting against critical race theory and cultural Marxism went viral this week, described on “Hannity” how the tenets public schools are using regarding CRT are similar to how Chinese Communist revolutionary Mao Zedong successfully divided the society she lived in as a young child in the 1960s.

Earlier this week, Xi Van Fleet spoke during a school board meeting in Leesburg condemning the school board for the critical race theory curriculum it is imposing on young students.

“We are teaching our children to be social justice warriors and to loathe our country and our history. Growing up in China, all of this sounds very familiar. The Communist regime use the same critical theory is to divide people. The only difference is that used class instead of race. This is indeed the American version of the Chinese cultural revolution,” she said at the time.

On “Hannity,” Van Fleet expanded on her warning to America as a onetime victim of mandated Maoist indoctrination:

“I just want to let the American people know that what is going on in our schools and in our country is really a replay of the cultural revolution in China,” she said, calling the similarities “terrifying.”

“[Critical race theorists] use the same ideology, the same methodology, even the same vocabulary. The ideology is cultural Marxism.”

Watch the segment below:

Watching this, I was reminded of Maximo Alvarez, the gas executive who escaped Communism in Cuba as a child. Alvarez was sounding the alarm about Marxism in America back in the summer of 2020.

How many times must we be warned by people who escaped Communism about what is happening in America today?